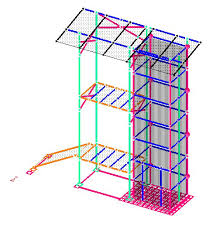 When it comes to installing a lift, there can be a series of technical difficulties such as to present a certain degree of difficulty and, consequently, to require a wider effort from the design point of view. Just think for example of the many old buildings built in the era in which the arrival of lifting platforms prepared for the vertical transport of people and goods was not expected, and therefore are not provided with the space necessary to let an installation of this type enter gender. In addition to the lack of space, it must also be considered that works of this type could damage the conditions of safety or stability of the building . It is not rare, however, that the property in question is of particular architectural or historical value, which prevents it from thinking of solutions that could cause a prejudice to the decorum, as happens for example in the historical centers of the cities. And yet, you can submit the eventuality in which an elevator system goes toaffect the enjoyment of one or more common parts also only to a condominium.
As you can easily guess, this is a series of eventualities that require an additional design effort, able to bypass the difficulties and eventually lead to the launch of a solution capable of putting together the various needs under discussion. An effort such as that represented by the calculation for a small castle in which the lift can perform its precious function, whether the mechanical means runs outside, or does it in the stairwell 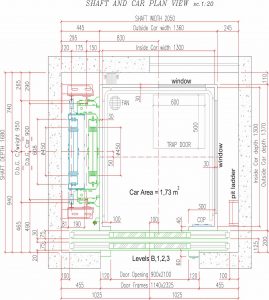 What is the lift shaft?

By shaft we mean the metal compartment intended to house the lift cabin and all the parts delegated to control its movement. The frame, in turn, goes to rest on a metal template which must be fixed to the sides of the pit. Naturally the work of the frame must be in compliance with the prescriptions of the law and the enterprises that are used to deal with of such a complex work , they are able on their part to put in place a vast range of solutions, including finishing touches and decorative techniques capable of satisfying a wide range of aesthetic and architectural needs.
It should also be emphasized how when calculating the elevator shaft it is necessary to pay particular attention to the theme of resistance which it must be able to oppose to atmospheric agents, a task that can be performed through the application of completely specific treatments . As a result, the supporting structure of the frame must be designed with the precise task of to oppose the maximum resistance even in the most severe conditions of use, starting from those that are registered n elle high seismic zones or coefficient ch and are exposed in such a way and especially by snow and wind loads and stresses.
The realization of headframe must then be carried out through the adoption of blind walls capable of ensuring the confinement of all the moving parts ch iamat and to make part of the plant. It is also possible to build partially open rooms , as long as the safety distances are respected in detail . In particular, when it is necessary to make the visual rendering of the prepared solution more attractive from an aesthetic point of view, the companies operating in the sector are used to propose transparent, reflective, colored or smoked laminated safety glasses , such as to be able to give the rooms required the necessary brightness, thus avoiding limiting the typical elegance of moving equipment.
What has been said so far should suggest that the creation of structures of this kind requires careful and targeted study for each individual case that may arise . Moreover, he must always take into account changes in the existing legislation.

In particular, those who are required to carry out the calculation of the elevator shaft must now take into account the new regulation 81-20 / 50, which requires that the guides and their anchors must not be subjected to deflection arrows greater than 5 millimeters . As far as the metal structure is concerned , the concept of “anchors or” is extended not only to the guide brackets ( which cannot be excluded from the supply of the castle unless received detailed construction drawings ), but to the entire structure, therefore also to the crosspieces and uprights . It follows that those who carry out the calculation of the elevator shaft must also take into account the guides and brackets and that the suppliers must certify the compliance with the standard of this value referred to “the entire system” thus including the uprights and crossbars. Furthermore, in consideration of the fact that the new calculation system is more complex, the guides can no longer only be “hypothesized” , but defined in detail.