The record ship with elevators and platforms for impaired mobility passengers 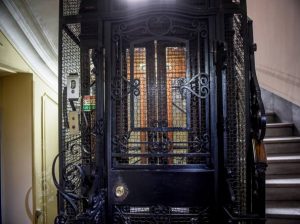 How many elevators exist in Italy? Approximately 960 thousand. Almost a million… A lot, really a lot, indeed! The insiders know that Italy is the second country in the world for number of lifts (about equal with Spain), after China and that the Italian elevator industry is a flagship of Made in Italy with a total turnover of 2.3 billion euros in 2016 and a positive trade balance of 630 million euros. With these numbers, Italy is one of the major world players in the elevator sector alongside China and Germany. Despite all this, no one knows exactly how many elevators are operating in Italy, when they have, been installed or precisely where. And this, is unacceptable! Elevators are in fact transport systems1 that make almost 100 million trips a day. Moreover, while the Italian lift fleet is the largest among the European states, it also has another negative record, being the oldest:

The European Commission, through the “Lifts Working Group” – Committee responsible for monitoring the application of the Directive 2014/33/EU in all member States – that was responsible for writing the Guide to the New Lift Directive (2014/33 / EU), repeatedly urged Member States to carry out a census of the lift park and to establish a register that summarizes and makes available to those interested data on each individual elevator (lifts, lifting platforms, car-lifts, etc.). Spain is one of the few Countries that has managed to implement national database. The city of New York pushed it further, and the information related to its urban lift park (76,000 lifts and escalators) are available on line to all: anyone can access an open database containing detailed information about each individual lift operating (range, height, speed, reported incidents, etc.). Safety is the main objective of a national register of lifts and elevators. Knowing the origin and history of each lift, it would be possible to monitor each machine, predict some defaults, recognize urgencies in advance, obtain statistics, consciously plan maintenance actions on older lifts and generate economics on aspects of real utility. (source “Elevatori”)