About 125 thousand new lifts every year: this is the number from which we need to start to understand the dimensions of the real phenomenon represented by the lift in Italy. A phenomenon that naturally binds to other topics of great importance, such as the quality of life of people suffering from problems of reduced mobility deriving from motor handicaps or advances in age.
But there is another topic that is becoming increasingly important, in such an important sector, that of eco-sustainability. The issue of energy saving is absolutely central in a country like ours, where energy bills are among the highest in the EU. The policy carried out by electricity suppliers therefore makes it absolutely necessary to try to keep consumption down as much as possible, so as not to have to pay too heavy a duty. A speech that also concerns elevators, a presence now almost inalienable within condominiums located throughout the national territory.
In this regard, it should be noted that the Italian vertical transport market is increasingly oriented towards exploiting the opportunities offered by the particular segment represented by the repair and replacement of pre-existing plants. In this way, companies in our country are increasingly concentrating their efforts on innovative solutions able to optimize existing plants. Also in terms of energy saving, as well as safety. 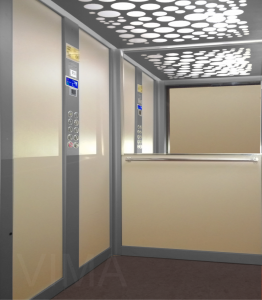 Energy sustainability: a concept that is literally enhanced in the production of some brands in the sector, starting with Kone, world leader in the sector that has launched Kone EcoDisc, a vertical transport system which is able to guarantee 70% energy savings compared to a hydraulic system and 50% compared to a traction system. To achieve these levels, the company aims in particular on combined solutions, starting from a regeneration system which uses the energy produced by the engine to illuminate the common parts of the building.
Naturally, there is no lack of solutions that rely on the switching off of the light in the lift cabin. Among the solutions presented by Kone, in fact we note the devices able to intervene on the light of the cabin after five minutes of non-use of the system. The light then goes on again when the machine is called again by the next user, thus allowing considerable savings. Suffice it to say that in this way it is possible to attack what has always been a significant problem of an energetic nature: over 35% of the energy consumed by an elevator is in fact consumed in moments when the cabin is stationary. No less important are the use of LEDs and renewables.
A solution, that of automatically turning off the lights inside the cab, which is also used by ThyssenKrupp Elevator, through the renewed version of Synergy, which is based on a direct drive transmission system that is able to ensure not only returns higher, but also a longer life cycle of the plant. The system uses a Led cabin lighting to which is added the automatic shut-off function once the elevator enters the stand-by phase. In this way, electricity consumption is reduced to a percentage close to 60%.
As can be easily understood, therefore, the elevator of the future is destined to exploit technological innovation in an ever more remarkable way, also for the purposes of an increasingly incisive energy saving.