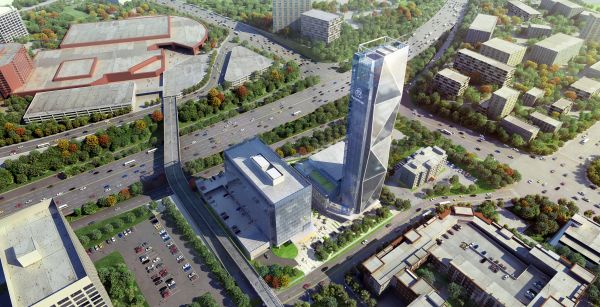 Testing the elevator is a necessity today especially in the most industrialized states, especially in the United States; with 900,000 lifts, 1 for every 362 people, America ranks third in number of lifts after China and Italy. For this reason it was necessary to test the systems by creating a safe and suitable place to recreate the many situations / stresses to which an elevator is subjected. Here is an image of the the USA tallest test tower under construction in Atlanta (height of 128 metres) where the new Innovation and Qualification Center (IQC) that will change the skyline of Cobb County. An American lift travels an average of 18 billion trips per year, transporting some 20,000 people. With 18 shafts, the tower is the third built globally by the German multinational after Rottweil (Germany) and Zhongshan (China) and will be used to test lifts at high speed (up to 18 m/s). The IQC will also test Multi, the first ropeless lift system travelling horizontally. The end of the project is scheduled for 2022, the new headquarters will house 900 full-time employees.