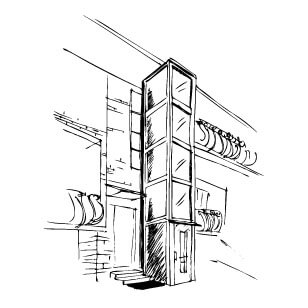 The installation of a plant for the vertical movement of things and people poses a series of rather complex problems, starting from the calculation of the elevator cabin. When installing an elevator inside a building, it is of course mandatory to identify the dimensions that can represent an effective compromise between the need to have space at one’s disposal for a comfortable transport and that actually available. A problem which arises particularly in buildings of less recent construction, in which often the stairwells do not allow to operate. In this phase it is therefore necessary to evaluate at best all the existing factors, sharing the decision-making process with an expert. The starting point, in addition to the available space, is naturally represented by the legislation, very precise in this regard, from which it is impossible to disregard.

What is says the law ?

To make text when it comes to designing a system of this kind is the d.m. 236 issued in 1989, which provides that the lift must be characterized by a cabin whose minimum dimensions are able to allow its use even by a person afflicted by motor problems and therefore forced on a wheelchair. As far as cabin doors and landing doors are concerned, they must be of the automatic type, presenting dimensions such as to allow easy use even by persons subject to disabilities.
It is then the same law that indicates again how the opening and closing times of the doors must ensure a comfortable and easy access, and that the parking of the car at the stop plans must take place with the doors closed. The legislation also examines the issue concerning control panels, which must have the highest command positioned at a height which proves to be able to allow the enjoyment even to the person forced to move with the aid of a wheelchair , as well as allowing its use even for the blind.
If these are the basic requirements, obviously aimed at a particular category such as the disabled, in order to implement the requirements on architectural barriers, it remains to be understood what the existing legislation foresees as far as dimensions are concerned. 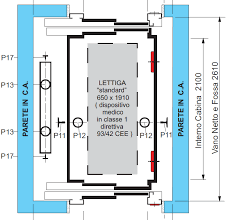 What is the minimum dimensions established by law

As we have said, therefore, the reference standard for the calculation of the dimensions of an elevator is the d.m. 236 dating back to 1989. Precisely it, in paragraph 8.1.12, goes to highlight how in buildings of new construction, of the non-residential type, the lift must have a cabin whose minimum dimensions must be 1.40 meters deep and 1.10 as for width. As for the door, it must have a minimum net light of 0.80 meters, positioned on the short side, while the distribution platform placed in front of the cabin door must have minimum dimensions of 1.50 × 1.50 meters.
Moving on to the newly built residential buildings, the calculation of the lift cabins must start from a minimum depth of 1.30 meters and 0.95 for the width. The door must then show a minimum net light of 0.80 meters placed on the short side, while the minimum distribution platform placed in front of the cabin door must be at least 1.50 × 1.50 meters.
If this is what is established by the law for new buildings, the speech changes in case the calculation of the elevator cabin concerns the pre-existing buildings that need an adjustment, that is the vast majority of the installations in our country, where the big The development of the sector began after the Second World War, continuing with considerable intensity in the following decades. If the hypothesis arises for which it is not possible to install larger cabins, the lift may have a cabin with minimum dimensions of 1.20 meters deep and 0.80 in width, while the minimum platform of distribution to the front of the cabin door may reach 1.40 × 1.40 meters.
Remaining in the field that refers to the adaptation of pre-existing elevators, the cabin and landing doors must however be of the automatic sliding type. In the event that it is not possible to replace the non-compliant doors, it is possible to remedy the problem by keeping the hinged door of the landing door as long as it is equipped with an automatic opening system. In any case, the existing legislation requires that the doors must remain open for not less than 8 seconds, while the closing time must never be less than 4 seconds.